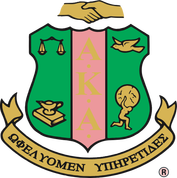 In 1908, Alpha Kappa Alpha Sorority, Incorporated® became America's first Greek-letter organization established by Black college women. Her roots date back to Howard University, Washington, D.C., where the idea for formation was conceived by Ethel Hedgeman Lyle of St. Louis, Missouri. She viewed the Sorority as an instrument for enriching the social and intellectual aspects of college life by providing mental stimulation through interaction with friends and associates. Through the years, however, Alpha Kappa Alpha's function has become more complex. After her incorporation as a perpetual body in 1913, Alpha Kappa Alpha gradually branched out and became the channel through which selected college-trained women improved the socioeconomic conditions in their city, state, nation, and the world.

In a world in which materialism is pervasive, and technology and competition have decreased the need for collaboration and cooperation, it is critical to have an association that cuts across racial, international, physical, and social barriers to help individuals and communities develop and maintain constructive relationships with others. Alpha Kappa Alpha Sorority, Incorporated® is that vital organization.

Alpha Kappa Alpha is a sisterhood composed of women who have consciously chosen this affiliation as a means of self-fulfillment through volunteer service. Alpha Kappa Alpha cultivates and encourages high scholastic and ethical standards; promotes unity and friendship among college women; alleviates problems concerning girls and women; maintains a progressive interest in college life; and serves all mankind through a nucleus of more than 240,000 women in the United States, the Caribbean, Europe, and Africa. Alpha Kappa Alpha Sorority is an international Sisterhood and every member adheres to these standards and holds our commitment of “Service to Mankind” dearly.

Candidacy for membership into Alpha Kappa Alpha Sorority is open to women of high ethical and scholastic standards who are pursuing or have completed courses leading to a degree at an accredited college or university. Our official headquarters is in Chicago, Illinois.
History Source: Alpha Kappa Alpha National Website - www.aka1908.com
Disclaimer: Alpha Kappa Alpha Sorority, Incorporated® is not responsible for the design nor content of these web pages. The pages of this website are the property and responsibility of Omega Lambda Omega who hosts and maintains this site.